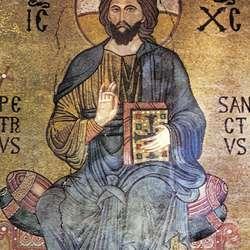 Who Was Jesus Christ?

Jesus (also called Christ which means king or Messiah) was born in Israel 2000 years ago. Modern civilization marks his birth by dividing time B.C. (before Christ) and A.D. (Anno Domini - or the year of our Lord). For his first thirty years, Jesus lived a traditional Jewish life, working as a carpenter. During this time, all of Israel was under Caesar's Roman dictatorship, including Bethlehem, where Jesus was born, and Nazareth, where he was raised.

In his thirties, Jesus began his public teaching and display of recorded miracles, yet still never travelled more than 200 miles from his birthplace. Over a three year period, despite his efforts to keep a low profile, Jesus' reputation spread nation wide. The Roman governors and rulers of Israel's provinces and the leaders of the Jewish people (the religious counsels) took note of him. Jesus' key messages included:

Many have asked "Who is Jesus Christ?" Jesus' most controversial act was that he repeatedly claimed to be God, which was a direct violation of the Jewish law. Therefore the religious leaders asked the Roman government to execute him. In each of several official trials, the Romans found that he was not guilty of breaking any Roman law. Even the Jewish leaders recognized that other than Jesus' claim to be God, Jesus followed the Jewish law perfectly. Still the religious leaders, using the argument of political disfavor, persuaded Pilate, a Roman governor of the Southern province of Israel, to authorize an execution.

Jesus was brutally tortured and then hung by his hands, which were nailed to a horizontal wooden beam (cross). This method of execution restricted the airflow to his lungs, killing him in three hours. However, according to more than 500 witnesses, Jesus returned from the dead three days later, and over the next 40 days journeyed in both the southern and northern provinces of Israel. To many, this was conclusive proof that Jesus' claims to be God were real. Then Jesus returned to Jerusalem, the city where he was recently executed, and according to witnesses, he left the earth alive by rising up into the sky.

As a result of these miraculous events, the number of his followers increased dramatically. Only a few months later in that same city of Jerusalem one record states that some 3000 new followers were added in a single day. The religious leaders responded by trying to stomp out Jesus' followers. Many of these people chose to die rather than deny their belief that Jesus was truly God.

Within 100 years, people throughout the Roman empire (Asia Minor, Europe) became followers of Jesus. In 325 AD, the following of Jesus, Christianity, became the official religion of the Roman Emperor Constantine. Within 500 years, even Greece's temples of Greek gods were transformed into churches for followers of Jesus. Although some of Jesus' messages and teachings were diluted or miscommunicated through the expansion of a religious institution, Jesus' original words and life still speak loudly for themselves.

Unfortunately not the ones with chocolate chips.

Some cookies are necessary in order to make this website function correctly. These are set by default and whilst you can block or delete them by changing your browser settings, some functionality such as being able to log in to the website will not work if you do this. The necessary cookies set on this website are as follows:

Cookies that are not necessary to make the website work, but which enable additional functionality, can also be set. By default these cookies are disabled, but you can choose to enable them below: